Day two of our cruise brought us to Nassau, Bahamas. We wanted to go to the Atlantis Hotel Waterpark for the day, but didn’t like the huge cost of the official excursion through Disney. Instead we did some research and found out that we could book a room at a nearby hotel and receive complementary passes to the waterpark with the room. It was kind of funny because we never set foot in the actual room. We just checked in, got the wristbands and then checked out. I’m sure the hotel is used to this happening, but it still seemed odd none the less. 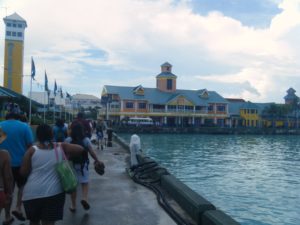 The cruise port in Nassau, Bahamas. Off to find a taxi to Atlantis.

The Atlantis Hotel was HUGE! We walked through the lobby and casino, and then outside to find the waterpark. I’m guessing there was a quicker way, but we got a little lost and ended up with a nice walking tour of the grounds. They had pools full of stingrays, it was really neat to see them up close. 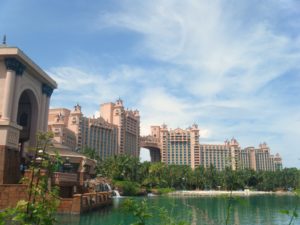 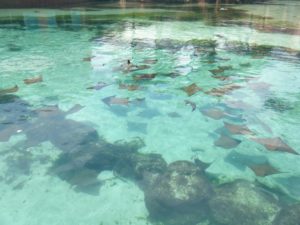 So many sting rays in the ray pools at Atlantis!

Eventually we found our way to the slides. They had a big “lazy river” that was propelled by a big wave machine to send you down the channels. Unfortunately it wasn’t running the day we were there and so we went around slowly instead. This was actually better for us, as it meant that it was easier to bring J-Kabob on the tubes through the river too.

There were standard waterslides, a tube slide that went through a shark tank and even water coasters! And for those that don’t like to walk, you can ride the tube conveyor up in a certain area. J-Kabob just loved the child sized water slides! 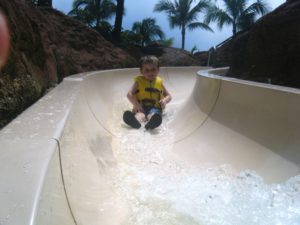 J-Kabob was big enough to use the little slides. How fun! 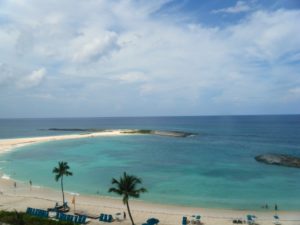 We had such a nice, relaxing time at Atlantis. Then, before long, it was time for one last tube around the river before heading back to the ship. 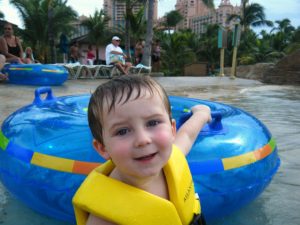 The is the face of a little boy who could play here all day!

Who did we find in our stateroom upon returning for the evening? Why it was none other than Mr. Towel Monkey! Isn’t it cute how they used the chocolates for his eyes? 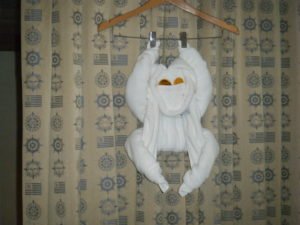 We had a little hanging monkey towel animal tonight.

Tonight was the Pirates In The Caribbean party so we went up on deck to watch. There was music and a bit of a show, followed by Mickey “flying” across the sky to defeat the pirates and take back the ship. Then there were fireworks and a special Pirate Night buffet. 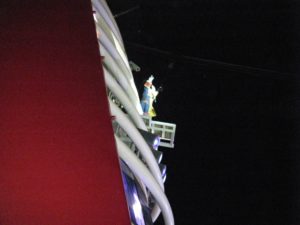 Mickey getting ready to zip line across the ship at the Pirate Party. 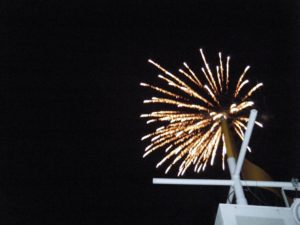 Fireworks at sea are pretty spectacular!

And that ended our day. Stay tuned for part three!