Disclosure: I received this complimentary product through the Homeschool Review Crew 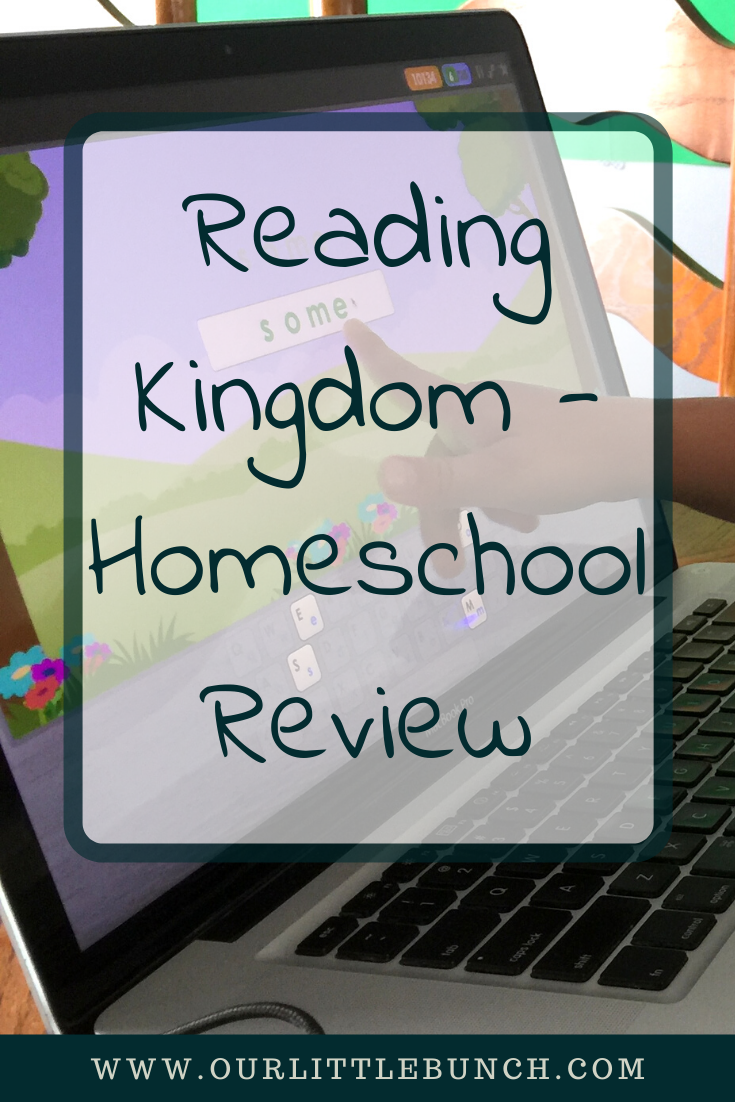 Even being totally new to the concept of reading, my 4 year old really enjoys his lessons with Reading Kingdom! We were given a 12-month subscription to Reading Kingdom, an online, learn-to-read program for children.

The Reading Kingdom is the ONLY system that teaches all 6 skills required for reading and writing success. It’s based on a patented reading system developed by Dr. Marion Blank, an award-winning educator and director of the Light on Literacy institute at Columbia University.

The program is designed to be used by children ages 4-10, although older children who are still needing some help with level K-3 reading can use the program as well. If using it with an older child the settings can be changed so that the art work in the lessons are more appropriate for their age.

To get started your child will need to take a placement test in order for the program to start them at the correct level. It is highly recommended to sit with your child during this test as it can be a bit difficult for younger ones to get through. My 4-year-old started the program from the very beginning as he is new to the world of reading and not yet recognizing all of the letters. If your child isn’t used to using a keyboard/mouse it may take a few lessons for them to get used to it.

From the very first lesson, Finnley was super excited to use the program. The colorful graphics and happy animations when he got a correct answer really helped to keep him motivated to complete the lessons. Because he isn’t used to using a keyboard, it would take my son a moment or two to find the correct letter. The program would often not give him enough time to find it before showing him the answer and moving on. I did however find that I could change the amount of time the program gives the child to find the answer on their own. That helped quite a bit so that he wouldn’t become discouraged about taking too long.

Another issue I found was that the program is showing the letters in lowercase, however, our keyboard only shows the letters in uppercase. Because he is still learning to recognize the letters, he hasn’t quite made the connection between the upper and lowercase versions. This means that I sometimes have to help by pointing out the corresponding uppercase letter on the keyboard for him. Over time he will learn to recognize them, but until then, it is the main thing that seems to slow him down. If your child already knows both their upper and lowercase letters, than this shouldn’t be a problem for you. It is suggested to use the program 4-5 days a week and to complete 1 lesson each time. Sometimes my son can only sit still long enough for half a lesson, while other times he will finish a whole lesson and want to keep going. There are also a couple of other sections besides the main program. They are: Story Smarts (to develop reading comprehension), Spelling Ninja, and Extra Games (memory, typing and word games that help to build keyboard and mouse skills). We occasional had an issue with the program just stopping during a lesson or game, where it was as if it had been paused and there was no way to continue on. In those cases I had to refresh the page and then we could keep going. I’m not sure if this is a glitch in the program itself or just a problem that we ran into due to our laptop (it’s an older laptop that has been showing signs of “slowness”).

All in all I feel like this is a really fun and engaging program for children and we will most definitely continue to use it with my 4 year old through out the summer and into the new school year!

To read more reviews of both Reading Kingdom and their other program, ASD Reading, please click on the image below.